From the heart of society

The U.S. Memorial Wereth VoG is a non-profit association and is financed by donations. It takes care of the monument, the memorial site and manages events, projects and activities in connection with the Wereth massacre. The association was founded 2002 by Herman Langer, Katharina Heinrichs-Langer, Adélaïde Schmit-Rikken, Willy Rikken, Louis Jonckeau, Anne-Marie Noël-Simon, Alois Hennes and Hubert Thomas and is still managed and supported by members of the Langer family.
It is believed, that the Wereth memorial the only one in Europe for fallen African-American soldiers of the Second World War.

The core of the association

As ambassadors of the Wereth 11, it is the mission of all of us to spread and remember the history of the eleven soldiers and the Langer family. Throughout the year we regularly attend commemoration ceremonies and cooperate with the U.S. Embassy and numerous East Belgian and European institutions.

Each year, the U.S. Memorial Wereth association organizes a public ceremony attended by hundreds of locals, US citizens and US and Belgian military representatives. The ceremonies are introduced by a walk from the Langer house down the hill to the Memorial site: The path of the Wereth Eleven. The speeches are supported by the american VGSC Gospel choir, the taps and a firing party from Spangdahlem.

Since 4 years, the association organizes school and youth projects to sensitize students for the local history and the story of the Wereth Eleven. We visit schools regularly to share the Wereth 11 story with the students. The Wereth massacre is a war story, but it is a story about selflessness and mercy against racism and exclusion, too. 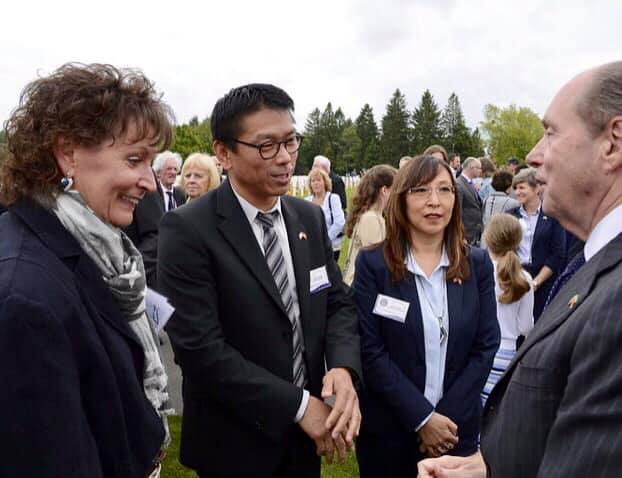 "Who am I and what can I change as an individual? Xenophobia, anti-semitism and oppression have returned to everyday life and we must show responsibility so that the terrible things from history are not repeated. Wereth therefore stands for 'Resist the beginnings'."
Patrick Langer (Ceremony 2019)

Members of the association, who left this world:

Adda Rikken
First President and co-founder of the association. She passed away on January 7th, 2010

Louis Jonckeau
Our treasurer for 20 years and co-founder of the association. He passed away on December 23rd, 2015

Doctor Norman Lichtenfeld
He represented our association in the US. He passed away on February 22nd, 2016

Tina Heinrichs-Langer
She passed away on January 20th, 2018

May they all rest in Peace